We're celebrating 25 years of Taking Part with a joyous season of work created with our local communities. Find out more.

Inside... Death of a Salesman

Inside Death of a Salesman takes you behind the scenes, giving you an insight into how this production came to life. From the original idea and the people behind the script, to the creatives and production teams who do amazing work to bring the show to our stage, Inside Death of a Salesman explores how different elements come together to form what you experience at the Young Vic. 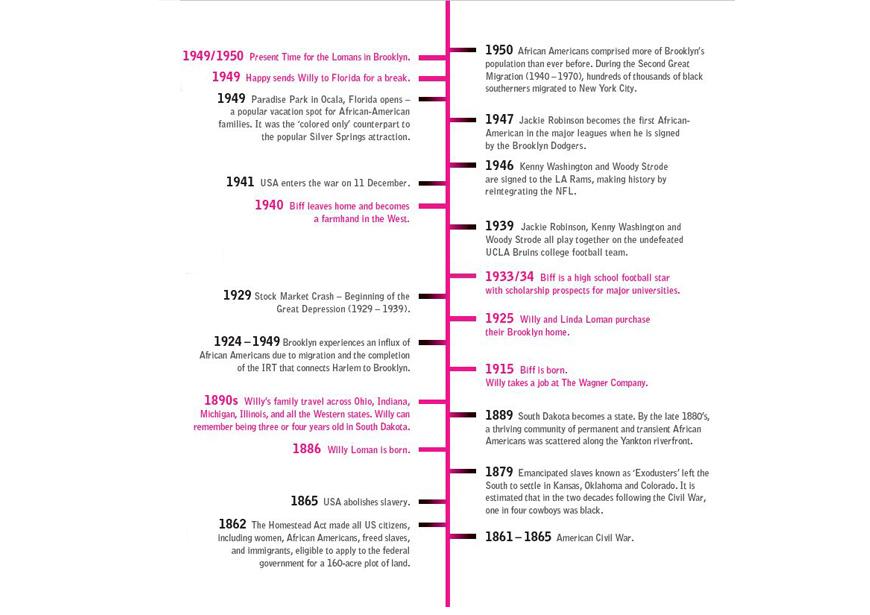 Kwame Kwei-Armah in conversation with Marianne Elliott and Miranda Cromwell

Anna Fleischle on Designing Death of a Salesman

The following displays extracts from Anna Fleischile’s programme notes as the designer for Death of a Salesman. She comments on being struck by Miller’s insight into the main character, Willy Loman’s, state of mind. Drawing upon personal experience of her own father committing suicide because of mental illness. She explains her choice to emphasize upon Miller’s description of Willy losing his sense of place in the world and the mental crisis he experiences as a result of this.

She explores Willy’s mental crisis within her set design through sensations.

“I looked at images of light and shadow, of light hitting us into our eye or pushing through a door, pushing unstoppably like the memories penetrating Willy’s mind.”

“What does it feel like if the normal things around you suddenly take on a different shape? What if they seem to be more fluidly moving in and out of what we define as ‘normality’, and what is real to us in our individual experience?”

She also conveys Willy’s sense of displacement in his life through shapes and colour.

“I looked at the setting of a 1940’s Brooklyn home- the overshadowing of the future and the vastness of an expanding society, placing the human figure into a small fragile shape. I wanted the audience to get a sense of what it might feel like to be in Willy’s mind; for the environment to stretch and shape, to go out of its seams and then return again. For the memory – the place he feels safe, the place he knew who he was – to be brighter, more colourful, more vivid than reality. His confusions are not ramblings we witness from the outside, they are invitations to travel these parallel worlds of experience so that we may get a small sense of an understanding of them.”

The full article can be found in The Young Vic’s programme for Death of a Salesman.